WB GROUP has been representing the Polish defense industry at the HEMUS 2020 fair in Bulgaria. We presented proven C4I systems, unmanned aerial vehicles and radio communications for the armed forces and public safety formations during the International Defense Equipment and Services Exhibition HEMUS 2020. It was the 14th edition of Bulgaria’s largest defense fair, which has been held for the first time in 1995.

The international HEMUS 2020 fair began on 30 September and ended on 3 October. WB GROUP was the only exhibitor from Poland that attended the fair in Plovdiv. The event has been held under the patronage of the Ministry of Defense and the Ministry of Economy of the Republic of Bulgaria. Organizers of the HEMUS 2020 made sure that fair area is compliant with all sanitary and epidemiological procedures.

During the first day of the exhibition President of the Republic of Bulgaria, Rumen Radev, visited our stand. We presented our product offer, which meets the needs of the technical modernization of the Bulgarian armed forces and public security formations, as well as other foreign and domestic customers’. 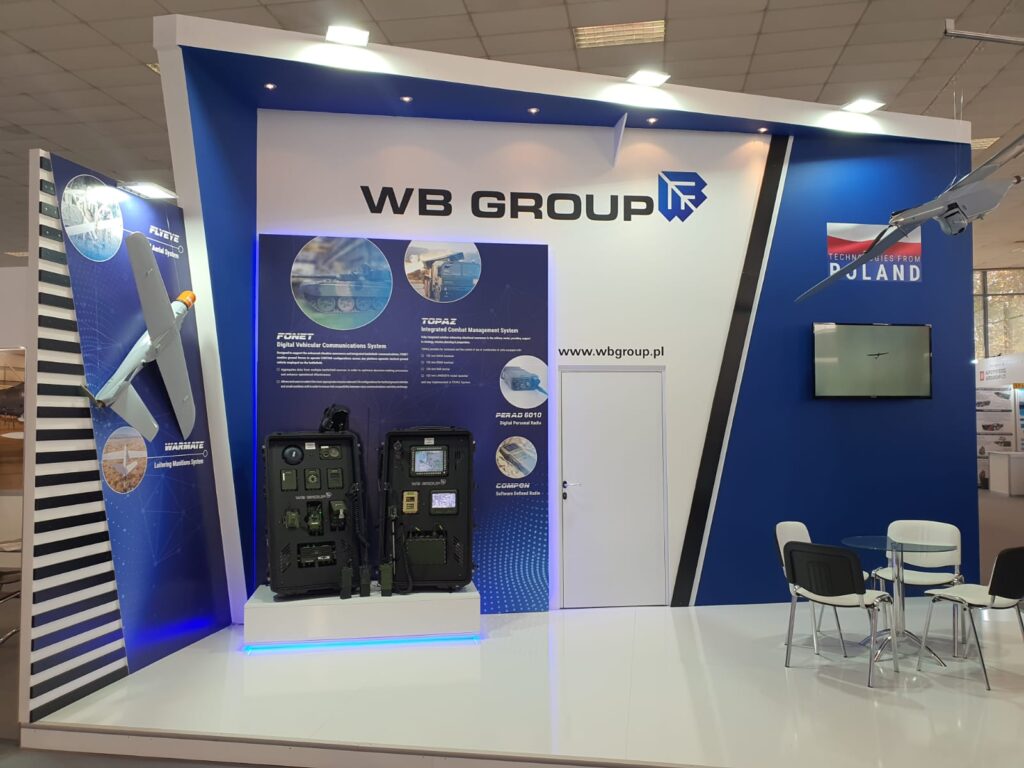 FONET is a communication platform that creates an uniform database of data exchange between vehicles on the battlefield. It provides digital voice communication based on available radio stations. FONET also integrates the vehicle’s electronic equipment and controls wired and radio networks. Vehicles equipped with FONET can work in automated command and battlefield management systems. The modular concept of the system allows you to choose the right configuration for the tasks, while ensuring full compatibility of voice communication and data exchange. The system was tested in combat conditions.

TOPAZ is a complete and integrated command and reconnaissance system designed to support the commanders and soldiers. It is a modular set of applications designed to give full control over the situation on the battlefield at every command level. Development of the system never stops. Experience from operation has allowed us to introduce functionalities related to the recognition with the use of various sensors (radars, optoelectronic systems and passive reconnaissance), command, logistic protection and unmanned systems strike control. TOPAZ has the ability to cooperate with its allies thanks to the implementation of interoperable protocols (including MIP, NFFI, NVG and JCHAT) and to display digital maps in accordance with the NATO standard. The system has been repeatedly tested in combat conditions. 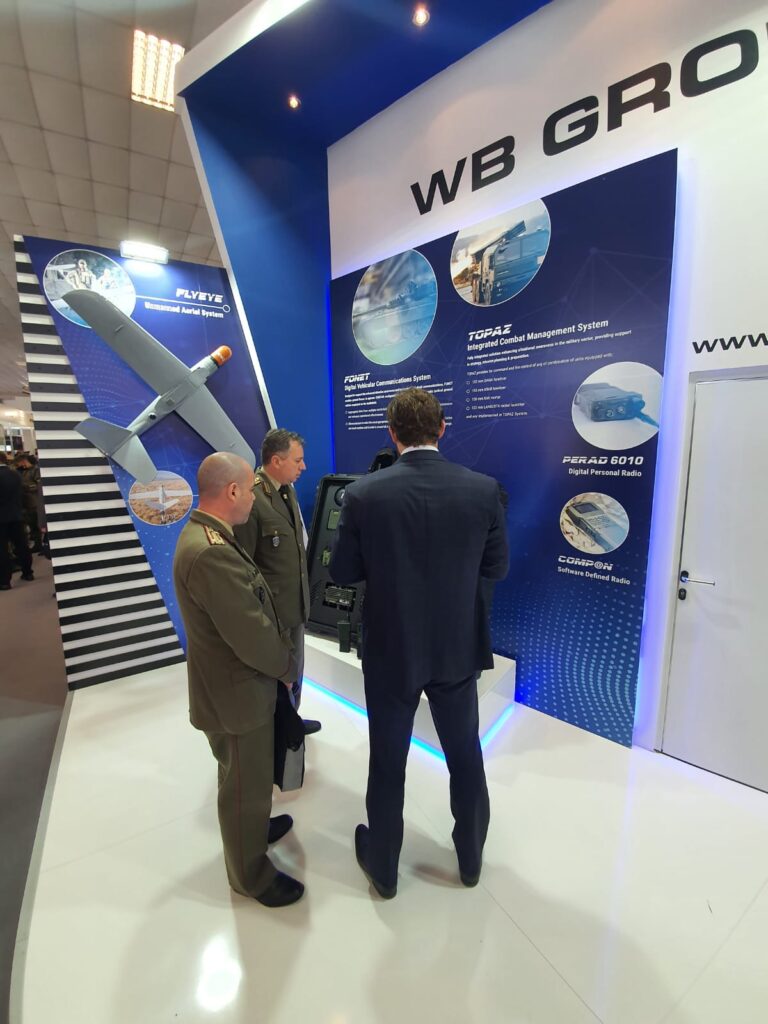 FLYEYE is an unmanned aerial system consisting of light unmanned aerial vehicles that hand-launch and land automatically. It can operate day and night, even in extreme weather conditions. FLYEYE can be used for image, acoustic, radar, measurement and signature reconnaissance tasks, also as a flying radio transmitter and a specialized means of transporting small and sensitive loads. The system can operate when there is disruption or no access to the GPS satellite navigation system. FLYEYE was tested in combat conditions.

WARMATE is a loitering munition system classified as a precise combat solution. WB GROUP has produced and delivered to customers several hundred platforms with several types of high-explosive and thermobaric warheads. The users of the circulating ammunition are the armed forces of four countries, two of which are members of the North Atlantic Alliance (NATO). WARMATE is able to track the indicated target on its own, enabling automatic and precise shooting. Tracking and automatic flight control based on this solution during an attack takes place on board the platform. It enables to destroy targets even after a loss of communication or in an environment saturated with radio-electronic countermeasures. WARMATE has been tested in combat conditions.

The system characterized by a lightweight structure and the ability to perform various types of missions. WARMATE is being successfully used by Polish and foreign armed forces and can be the key element on the future battlefield. 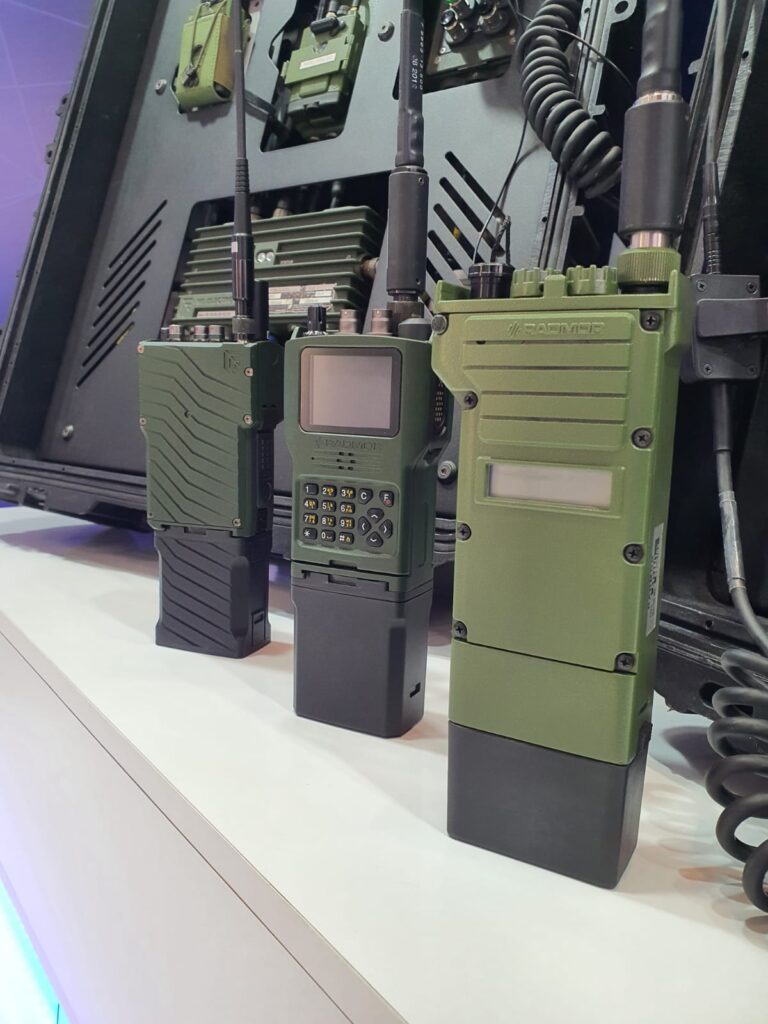 PERAD is a modern personal radio, which is easy to use, high functional, ergonomic and reliable. The device is distinguished by a low spectral density of the radiated signal, excellent sensitivity, selectivity and built-in intelligent encryption and anti-interference algorithms. This makes the device almost impossible to detect and intercept transmissions. Each radio station is a network node, a miniaturized base station, supporting other nodes cooperating with it, so that even the most distant system elements receive access to the transmitted data. PERAD is a radio capable of operating in full multi-user conference mode. The device has a built-in intelligent energy management that guarantees many days of operation in saving modes.

COMP@N is a handheld radio made in SDR (Software Defined Radio) technology, developed using a common hardware platform. The device is designed for voice communication: tactical short-range VHF and UHF for land forces; tactical short-range for air forces; short-range with paramilitary and civilian services, using radio channels and types of modulation available on the radio. COMP@N radios provide comprehensive security in the field of TRANSEC, NETSEC and COMSEC mechanisms based on, among others o AES-256 algorithms with simultaneous use of SCIP technology (STANAG 5068).

3101 is a handheld radio designed to operate in extreme conditions, characterized by high resistance to mechanical damage and environmental exposure. It is a modern VHF FM communication device for use at company and platoon levels. It is used for communication on the battlefield over a distance of several kilometers, in combination with a vehicle set, the range increases to several dozen kilometers. R3501 enables non-secret and masked analog audio communication, encrypted digital audio communication (AES 256), data transmission, cooperation with an external modem and an encryption device.